What is it about Chile that makes the whitewater kayaking so great?  The answer lies in a combination of geography + geology + precipitation + infrastructure.

The Andes spine is the second largest mountain range in the world lying north to south. The snow and glacier filled peaks have approximately 200 KM to drain to the Pacific. To a kayaker this can only mean one-thing… lots of whitewater. 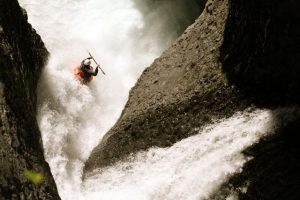 The Seven Teacups National Park offers the most spectacular cascades on the planet. Above Patagonia Study Abroad director David Hughes drops into the Throat of the Devil. One of the coolest and most photogenic rides on the planet.

In Chiles northern arid wine valley regions the annual rain and snow pack is less than the south. Catching whitewater rivers during the short August to December season can produce some of the most spectacular rivers on the planet. Notably, the Seven Teacups National Park offers over 100 clean cascades. It’s a unique basalt crack in the earth that has been milled and polished for millions of years. The energy and experience is nothing less than spectacular.

Temperate Rainforest from Rivers District to Tip of Chile

Temperate rainforests are coniferous or broadleaf forests that occur in the temperate zone and receive high annual rainfall. Now, you can combine the following:

Sprinkle Volcanic Cones on the Surface 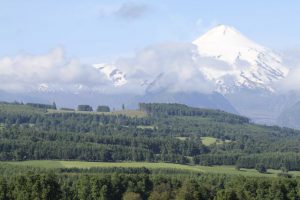 Pucons Volcan Villarrica is one of many protruding Andes range cones that created basalt drainages. These unique canyons produce a whitewater wonderland for kayaking throughout Chile.

Chile has the second most volcanoes on the planet. Now, let’s change Chile’s formula for whitewater.

The volcanoes multiply the whitewater factor of any mountain range. Imagine the mountain range having cones pushed up through the ridges. Then the exact drainages where lava flowed, magma hardened, and pearly basalt formed became lowest point cracks and drainages.  Naturally, these cracks and lava fields drain the glacial melt and rainfall off the volcanic ridges. Holy smoke… it’s awesome to ride in your kayak.

Why does Pucon Chile have the best whitewater for kayaking?

Pucon lies in the heart of what is known as Chile’s Rivers District. Originally, Pucon became a trading route to Argentina for the military. Ever since then the international highway to Argentina has provided excellent transportation infrastructure. Pucon’s Volcan Villarrica along with a couple of other lesser-known cones combined with dozens of rivers, lagos and lagunas create one of South America’s most visited adventure destinations.

What does this mean for the kayaking in Chile formula?

This means that we can add to the whitewater kayaking formula infrastructure in the form of accessible rivers or, “ROADS.”